The History Of Eyeglasses 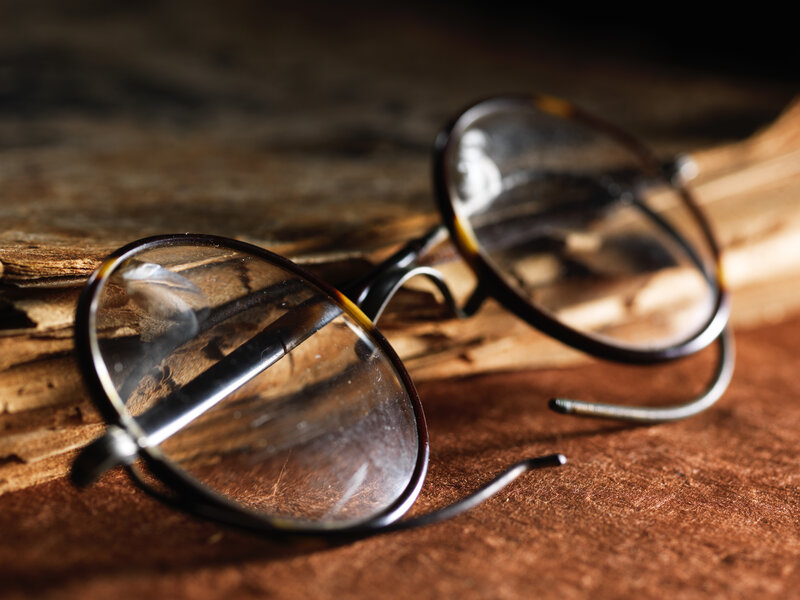 Those who depend on glasses to see the world in detail owe an abundance of gratitude to the Romans, who discovered that glass could be manipulated to magnify things. Like modern-day magnifying glasses, wealthy Romans commissioned glass blowers to make glass spheres. Put against small text, the letters and words became legible.

The History Of Eyeglasses From Glass Spheres To Glass Lenses

Over time, glass workers and engineering minds continued to perfect this art, creating thinner and thinner curved glass blocks and lenses. This was no easy feat because, as you can imagine, glass had to be as clear, clean, and smooth as possible to minimize distortion.

While we don’t know the name of the first person who set these glass lenses into a frame, we do know that the longest surviving glasses that we know of date back to the 13th century (the 1200s). They emerged in Italy and were mostly worn by monks, who were some of the only people allowed to learn to read and write at the time.

These early glasses were more cumbersome than the glasses you wear today. Most often, thick curved glass lenses were set into leather or wooden frames. So you can imagine they were far less comfortable than the glasses you might wear yourself while reading this post. As a result, enterprising monks and wealthy glasses-wearers were motivated to improve the design for size, efficiency, and comfort.

Over time, glasses have gone through many design phases. These have included lenses set into frames with a metal “headband” that ran from the bridge of the glasses, up and over the forehead, spanning the crown, and with the other end of the band anchored to the back of the head.

There have been glasses that hinged in the center and perched on the nose like spectacles and glasses held in place with leather or material straps that secured at the back of the head. We also have images, mostly from Renaissance art paintings, of men wearing glasses perched on the nose but secured by an extended handle the wearer could hold on to. This version looked much like the opera glasses you may have seen in images from the 18th – 19th centuries.

As we mentioned above, art renderings form the largest body of evidence that glasses existed during this period. They more or less continued to look the same until the 1700s. By that point, most glasses were worn without any handheld devices necessary. They became “hands-free,” and the lenses continued to get thinner and thinner, and the frames got thinner, too, as glass and metalwork innovation improved over time.

The “first optometrists” provided clients with rudimentary vision tests and then worked with glassblowers to customize the shape of lenses to accommodate their patients’ vision issues. As you can imagine, the bulk of the glasses made during these first several hundred years were devoted to people who were farsighted to help them read.

Even so, eyeglasses were costly and highly prized. They were originally only used by men (women weren’t allowed to be literate for much of the early centuries of glasses-wearing). Once women were able to learn to read, glasses were only available to religious scholars and the super-wealthy classes.

While we can’t give credit to the first person who invented magnifying lenses and the first pairs of eyeglasses, we can pay homage to Benjamin Martin’s innovations. He is one of the most famous 18th-century eyeglass manufacturers. His glasses were named Martin’s Margins and they are still sought after by collectors today. You can Click Here to see a pair.

Scholar, inventor, and politician Benjamin Franklin had a personal interest in improved spectacle design since he needed them to read and write. It was Franklin who invented the first pair of “bifocals,” which allowed the wearer to see far distances and have the ability to read or look at things at a close distance without having to remove their glasses. In the beginning, Franklin did this by cutting two different lenses in half and then replacing them in a frame.

Over time, opticians (those who make eyeglasses) developed the ability to create that effect in a single lens. These innovations are impressive when you consider that Benjamin Franklin’s bifocal improvements of the 1700s are still used in 21st-century eyeglass technology.

Eyeglasses continued to be a luxury for the rich all the way into and beyond the 19th century. Fortunately, the industrial revolution made large-scale production possible. While still pricey, most middle-class adults finally could save up and purchase a pair. As you can imagine, eyeglasses were considered “precious” to the owners since their price made them almost impossible to replace on the spot for all but the upper classes.

With the ease of production came an emphasis on style. In the late-19th and early 20th centuries, eyeglass manufacturers began focusing on style as much as functional improvements. As a result, what was once a “one style fits all,” more or less, became available with differently shaped frames that came in a variety of colors and patterns. Eyeglasses also became more readily available for children, which had largely been left out of the glasses equation unless they were born to wealthy families.

Interestingly, while eyeglasses were largely improved upon in the European and American markets, the first tinted lenses emerged in China during the 12th century. At this time, the lenses were not used to protect eyes from the sun but, rather, to keep people from being able to see the expression in the eyes of Chinese judges during court cases. By the 20th century, tinted glasses were being used more and more for both style and light protection for those with sensitive eyes. In the 1920s, sunglasses were increasingly popular.

Plastic lenses didn’t enter the market until the 1980s, and this was a revolutionary improvement. Now, in addition to being far more affordable, broken lenses were far more dangerous for those who wore glasses on a daily basis. Today, those who wear eyeglasses have a wealth of options available to them, including prescription sunglasses, bifocals, transitional lenses, and both prescription and non-prescription lenses that block the blue light spectrum flood we’re exposed to by our screens.

Those who wear eyeglasses should be grateful for the early innovators of prescription lenses. Without them, we’d be blind! Are you overdue for your next comprehensive eye exam and an updated eyeglass prescription? Schedule a consultation with Atlantic Eye Center.

At What Point Are You Legally Blind?

Your Guide To Eyeglass Lens Coatings