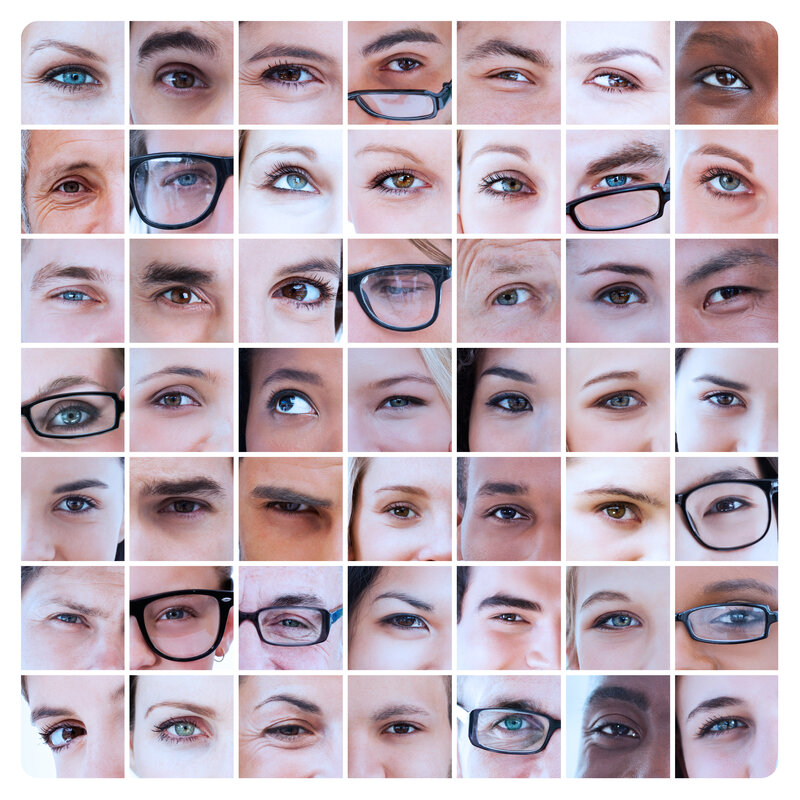 Your eye color is 100% linked to specific genes. And so are many of the most common eye conditions and eye diseases leading to vision loss. However, for the most part, your eye color doesn’t put you at risk for vision conditions (an exception being albinism). However, the color of your irises can make a bit of a difference in how you view the world.

The Beginning: Genetics & Your Eye Color

If you remember your first lessons in genetics at the middle school or high school levels, odds are you remember studying Gregor Mendel and his punnet squares. Eye color is one of the easiest things to pop into a punnet square because brown eyes are dominant.

The general theory around the idea of inherited eye color goes like this:

If you inherited both “big Bs” (brown-brown), your children will only have brown eyes (BB). However, some people with brown eyes have one dominant gene (B) and one recessive blue-eyed gene (b), which means they contribute (Bb) to the mix – (Brown-blue). If a person with Bb brown eyes has a child with someone else who has a Bb mix or a child with a blue-eyed partner (bb), they have a chance of having a child with lighter eye colors.

That theory persisted for hundreds of years. Now, as scientists have learned more about the complexity of genes and gene mutations, we know that predicting eye color based on Mendel’s punnet square theory isn’t the whole story. It turns out that eye color and all of its variations are more complicated than that. However, one thing that is for sure is that the color of your eyes has everything to do with melanin.

Melanin is a skin pigment. The more melanin you have, the darker your skin will be. For example, brown eyes have lots of melanin in the iris, while blue and green eyes have less melanin. Melanin also serves as a level of protection from the sun. So, even though individuals with darker skin should always wear sunscreen, they are less sensitive to sunlight than very fair individuals are. The same is true for your eyes.

While those with lighter eye colors may be more sensitive to sunlight or the bright headlights on an oncoming vehicle at night, everyone should wear sunglasses (and hats) to protect their eyes from the sun’s UV rays.

You may have noticed that non-Hispanic babies almost always have blue or grayish eyes when they’re born, regardless of what color eyes they have later on. This is because their eyes haven’t produced all of the melanin they will have when fully developed. Most babies’ eye color is “set” by the time they reach one year old, but some children’s eyes aren’t fully “colored” until they are about six years old or so.

Here are some facts about eye color:

The most common eye color is brown, and that accounts for about 40% of our population’s eye color. Brown eyes encompass a range of hues, including:

Green eyes are the least common eye color, which makes them one of the most “desirable” eye colors in polls taken around aesthetics. Only about 2% of the population has true green eyes. As with their blue-eyed counterpart, the irises of green eyes contain less melanin, which can cause sensitivity to light.

Only about 1% of humans have grey eyes, and the majority are found on the European continent – mainly in the north and eastern regions. Scientists think that people with gray eyes have even less melanin than those with light blue eyes. The effect scatters light across the surface, which makes the gray appear quite pale.

Different eye color in each eye

Then, there are people with different colored eyes, such as one blue eye and one brown eye. This is due to a genetic mutation, and the effect is called heterochromia. Heterochromia can also be caused by problems during development or as the result of an eye injury or disease.

Most of us have fully developed eye color by the time we reach age six, and the color doesn’t change much. However, there are some people whose eyes do change color a bit from adolescence and adulthood. These changes are more subtle, like a hazel/brown eye becoming more hazel/green or a person with dark brown eyes having more medium-brown irises later on. Cataracts can also change the color of our eyes because the film that develops over the lens of the eye creates a lighter, opaque, and cloudy effect.

Wondering What Color Eyes Your Children Will Have?

Without specific genetic testing of an embryo, there’s no way to know what the exact color of your children’s eyes will be because it’s all a game of genetic recombination chance. That said, we offer you this breakdown from the American Academy of Pediatrics website:

Regardless of what color eyes you have, they need regular attention from a qualified optometrist. Contact the Atlantic Eye Institute to schedule an eye exam for your Baby browns, blues, hazels, greens, grays, or heterochromatic eyes.

At What Point Are You Legally Blind?

Your Guide To Eyeglass Lens Coatings